Transit Lounge has published my creative non-fiction book ‘Banana Girl’. That’s another way to say ‘It’s a memoir’. It’s been available since the beginning of November 2013.

I first drafted this book in my RMIT Writing and Editing course in 2008, refined it while on my Asialink residency in 2009, and since then I whittled it down into a book.

Set in 2009, before I’m about the set off for Laos, the book is parts cultural angst, feminist meanderings, gen-Y yearnings and Melbourne lovefest. And I dip in and out of memories from my time in Canberra, and where my family lives. It’s not a migrant daughter story per se, but more broadly about turning 30 as an Asian-Australian woman living in inner city Melbourne. 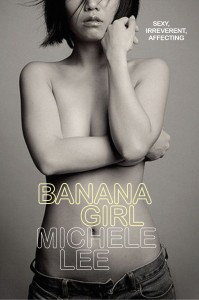 You can buy a copy from most independent book stores around Australia. Transit Lounge, the publisher, has information about where to buy books on its home page.

You can also buy Banana Girl as an e-book from iBook.

Lee captures the world of all those striking young creatives that walk Melbourne’s streets, lurk in the bars you wish you could find, shop at Readings, and write the plays you see. It’s not pretentious, however: it’s intimate and conversational, like falling into her friendship group (she’d refer to you as Reader, maybe), or listening to her life from the pocket of her dress after she butt-dialled you. Sometimes she makes you sigh – she is not afraid to show imperfections, even those she’s not aware of – but mostly Lee is just a very good storyteller: about herself, about the open possibilities of life, and the hope that you will always be better than you wanted to be in your youth.
Fiona Hardy, Readings Newsletter November 2013

Lee’s journey of self-acceptance is written with the intimacy of a private diary, and paints the picture of a complex and fascinating young woman with a unique insight into two vastly different worlds she has learnt to simultaneously embrace.
Fiona O’ Brien, Melbourne Review November 2013

Michele Lee, an experienced playwright but debut author, is not as well known in writing circles as other successful young memoirists such as Marieke Hardy and Benjamin Law, but she ably matches their no-holds-barred approach to narrating the self, most notably their wicked sense of humour.
Emily Laidlaw, Bookseller and Publisher October 2013

Lee’s sexual frankness is not only brave, it reveals exactly how much of a banana she really is, ‘modern and golden, slipped loose from the rest of the bunch.’ In a way, she is not only a ‘minority of a minority’ because she is Hmong, she is also one in a minority of Asian Australians who are comfortable admitting to having sex and enjoying it. This is perhaps the most delicious irony that exists in Banana Girl: a new Australian who has assimilated into her adopted community at the expense of her own.